Why everyone should care about Australia’s flying foxes

Flying foxes have never been more at risk than they are now — between extreme heat waves, bushfires and habitat destruction, entire populations of this 'keystone species' are plummeting. And yet, could the biggest threat to these unique animals be public perception?

After devastating fires tore through millions of hectares, killing over a billion native animals, there has never been a more important time to protect flying foxes (also known as fruit bats) — a species that entire ecosystems rely on for survival. Some species of flying fox have already declined by 95% over the last century — and many thousands more have died in the last couple of months alone. These sensitive animals are particularly susceptible to heat, and unforgiving Aussie summers have led to mass-deaths of fruit bats, including babies that are especially vulnerable during heat events. This past summer has seen entire colonies decimated during unforgiving heat waves — as many as 15% of one Melbourne colony died from heat stress in just three days.

Now, in the wake of the COVID-19 pandemic, there have been reports that members of the public are becoming increasingly concerned about sighting flying foxes in the wild – even though scientists concur that bats were not to blame for the transfer of the virus.

Despite grey-headed flying foxes being listed as a threatened species, the Australian Government removed what little protection they had under the Environmental Protection and Biodiversity Conservation Act (EPBC). The former Environment Minister, Greg Hunt, allowed a fast-tracked approval to shift a flying fox ‘camp’ in Bateman’s Bay in NSW – against scientific advice. This decision not only left these animals even more vulnerable to distressing 'control' measures, but set a dangerous precedent — removing the only legal process to shield their crucial roosting habitats from disturbance and destruction.

Flying foxes are one of Australia's most misunderstood and maligned native animals, and efforts to protect them can be hindered by misinformation and poor public sentiment. Fruit bats are often treated like 'pests' in areas where they roost — with hungry animals regularly trapped in netting around fruit trees, and locals complaining of the sound and smell. State governments continue to issue easy-to-obtain shooting permits to landowners, and cruel and damaging 'dispersal' methods as mentioned above leave flying foxes vulnerable to stress and exhaustion, especially during tough summer months. Tragically, even after the devastation of the bushfires, Wildlife Victoria has reported a spike in brutality towards flying foxes.

Never before has it been so crucial to protect flying foxes — not only for their sakes, but for the future of entire ecosystems and the many native animals that rely on them. But in order to change the future for fruit bats, first we need to change the public narrative about these unique Australian animals. Here are five very good reasons to foster compassion and respect for these 'gardeners of the sky': 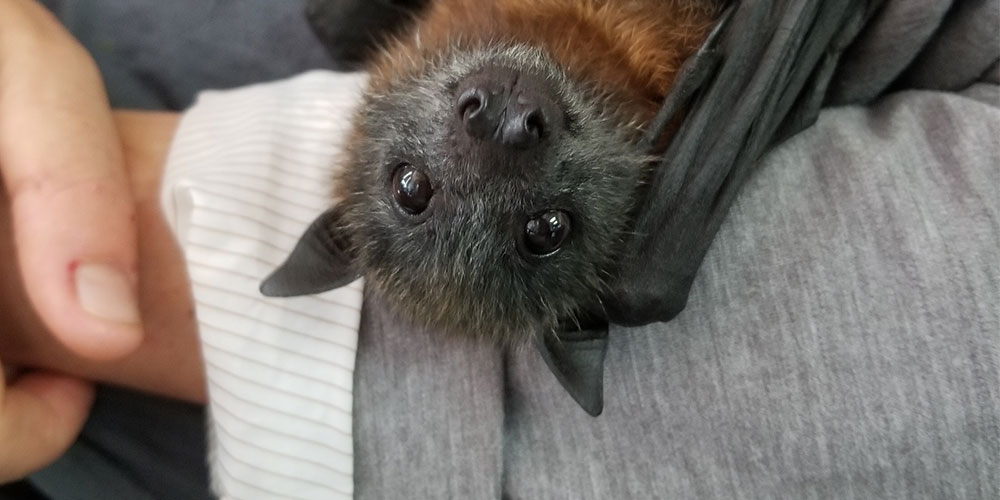 Flying foxes are not only remarkable animals — they're vital to our environment. Without them, entire ecosystems could collapse. These native animals are the only species that pollinate trees at night — when most Australian trees need to be pollinated. So they are responsible for helping to regenerate our forests and keep ecosystems healthy. They are a migratory and nomadic 'keystone' species; meaning a species that many other species of plants and animals rely upon for their survival and well-being. Flying foxes, like bees, help drive biodiversity, and faced with the threat of climate change, land clearing, and other human-caused ecological pressures, it has never been more vital to protect them.

Flying foxes are foresters keeping the eco-system together. If we are to keep the remnants of our forests healthy, we need the flying foxes. The two are inseparable.Dr Nicki Markus, Chief Conservation Office of Bush Heritage Australia 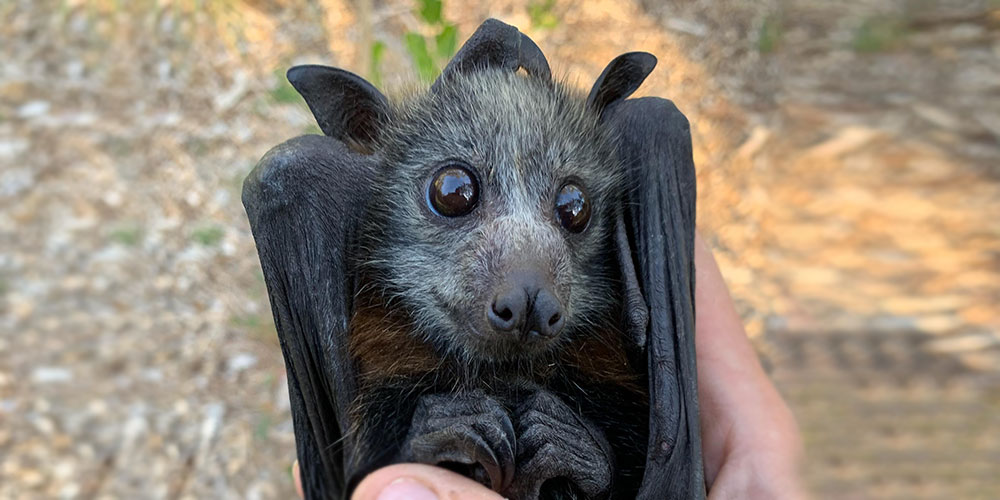 Do those big brown eyes and that little wet nose remind you of anyone? Wildlife carers who spend countless hours with these little creatures describe them as highly affectionate, intelligent, full of personality, playful — and very endearing. They enjoy cuddles, ear massages and tummy rubs, and babies — called pups — thrive on contact and affection from their human carers. 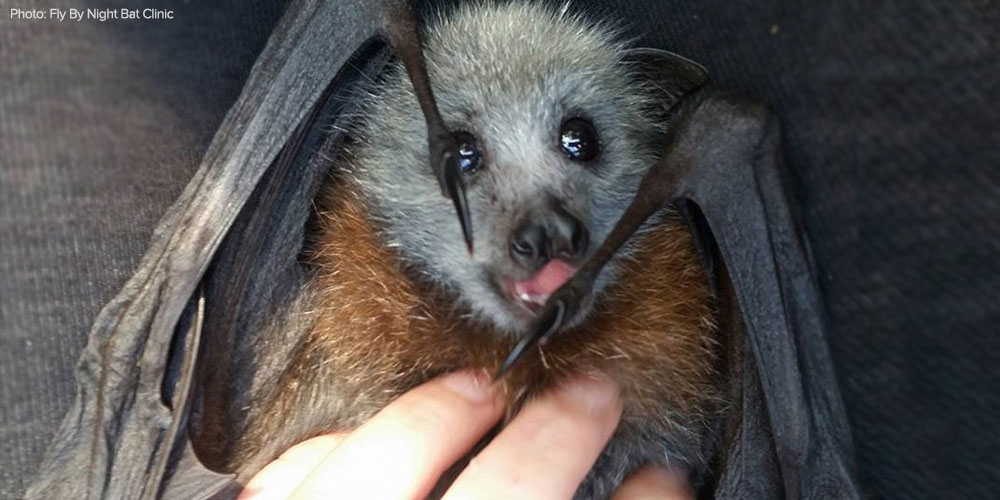 For many species of wildlife, every day in the Australian wilderness presents another challenge, and with weather extremes predicted to get worse, the struggle to survive is going to get tougher. Flying foxes are particularly susceptible to the heat, and every scorching summer will see countless bats die from heat stress. As if that weren't bad enough — land clearing, shooting, and backyard fruit tree netting continues to cause untold suffering and death in many parts of Australia. 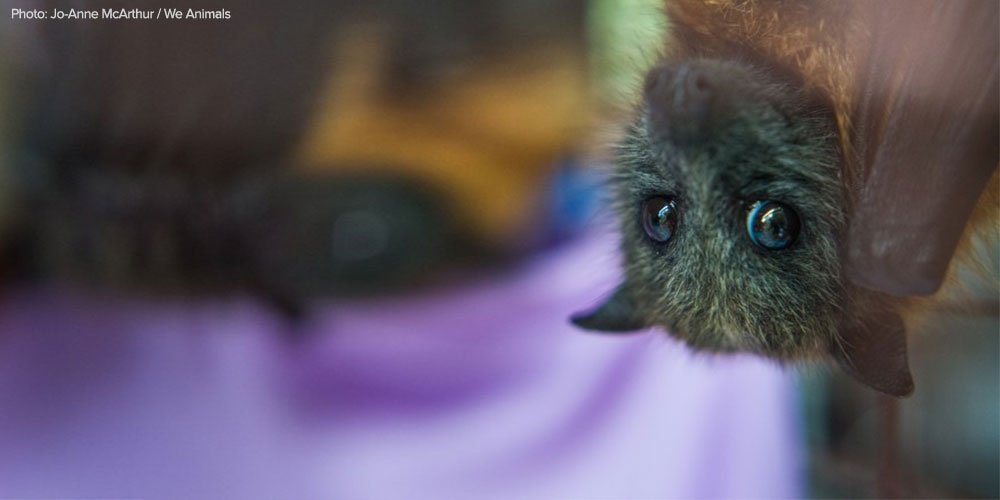 There are four mainland species of flying fox: Black, Grey headed, Spectacled and Little Red. Tragically, populations of flying foxes across Queensland, NSW and Victoria are in decline. Both the Grey-headed flying fox and Spectacled flying fox have declined by at least 95% in the past century, with massive losses in the past 30 years. Some researchers believe they could be functionally extinct by 2050. 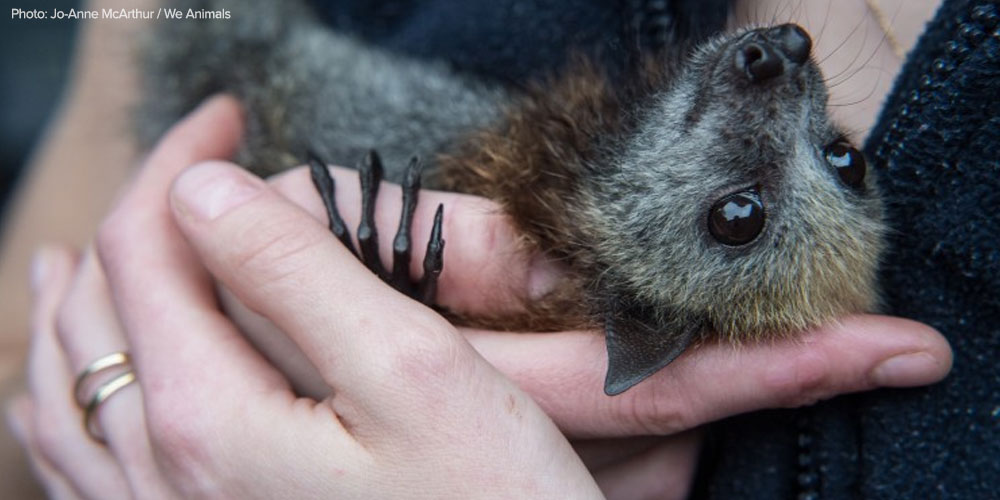 Like many native animals, flying foxes' greatest threat is habitat loss. They fly by night in search of food, and return to the same trees each day to rest and chatter with their colony-mates. Flying foxes primarily migrate along the East coast of Australia — moving in large groups (called camps or colonies) as native food comes into season. They have done this for thousands of years — but over time, these colonies are being surrounded by human development, with locals complaining of the noise and smell, and netting their trees to prevent flying foxes from eating the fruit. Sadly, flying foxes are no match for developers, or councils responding to angered communities. The result: colonies are targeted for shooting — which is not only cruel, but totally ineffective. Many animals who are shot are only wounded, and slowly die over days from infection and dehydration. The situation is compounded when this is a female with a pup on board. The result is often that she and her baby perish slowly.

Flying foxes are essentially providing a community service. Other native animals and plants are reliant on them for their existence — they are keeping Australian native forests and its inhabitants alive! For their invaluable work, these native animals are treated with disdain by some councils and politicians who employ poor and unscientific management schemes — such as lethal control or dispersal of colonies or camps — that not only do nothing to restore the balance between humans and wildlife, but can perpetuate misinformation and ignorance about these animals. What is really needed here is compassion and understanding.

Be a hero for Australian fruit bats

Here are three simple things you can do to protect these unique native animals from cruelty — and help them get back to looking after our precious ecosystems.

A guide to feeding hungry wildlife survivors of bushfires

OUTRAGE: Bushfire survivors now at risk of being shot

16 'meaty' meat-free meals – The flavours you love, no meat
We all know that eating vegan is better for your health, animals and the planet. But sometimes you just want a big bowl of the hearty, familiar foods you know and love. These recipes are for you. Dig in » »
www.animalsaustralia.org